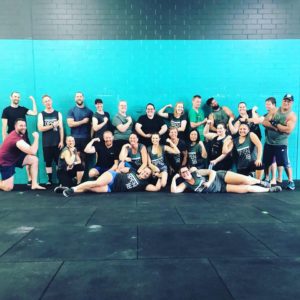 We all begin at the gym with that thought – ‘I don’t want to come last’. Most experiences in society have taught us that coming last means losing and failing, but at CrossFit, that’s definitely not the case.

Coming last means you pushed yourself. You went outside your comfort zone. Coach said the time cap is 15 minutes and you dug deep to produce the most work you could in that 15 minutes. You probably opted OUT of some scaling options that you might have usually used – you chose a heavier weight or you jumped on a higher box, you did all the 400m runs instead of cutting them down to 200m like you usually would. You did all your movements with great form and challenged yourself instead of cutting corners to be the ‘winner’.

Lots of people are scared to come last. You know who isn’t? The people who have come last a good few times before. Because they know two things.

One – that nobody cares! People are only impressed by your effort. And two – that these were often the times they were MOST impressed by their own efforts. Coming last was an accomplishment because they pushed for those extra few kg, those extra few reps and they came out the other side a better athlete and even a better human.

If you have never come last before, ask yourself why? Is it because you’re a games level superhuman that can’t lose? Unlikely (sorry fam ?). Or is it because you’re scared and so you often hold back, do the safe weights, scale when you’re feeling slow instead of backing yourself in?

If it’s the latter, it’s time to come last every now and then. Nothing will empower you more than pushing yourself outside of this safe zone and realising your own full potential. And nothing will empower you more than feeling vulnerable in a safe place (your gym), coming last and realising you have nothing but friends and support around you and not a single thing to be afraid of.

The best of us come last sometimes. Because to be the best version of you, you need to challenge yourself. The best version of you isn’t worried about what anyone else is doing or how fast anyone else is going. The best you is just doing their best work and seeing it all pay off. Coming last can be an accomplishment. I dare you to be last this week! ❤️

Book a time to chat about your goals with us: Here!

1. Refresh Your Goals: Sometimes when we’ve been after the same goal for a long…

These holidays, I implore you to think differently. The holiday season isn’t a ‘write off’…

Each week I’m inspired by so many of our members. The last couple weeks of…

We all know that reaching our goals takes effort and sacrifice. But just how much?…

How many of you still have Xmas parties this week? Then New Years is just…

Change is hard, There’s no doubt about it. Our daily habits have developed over 20,…

Home Try A Class For Free What Is Crossfit? Memberships FAQ The Team